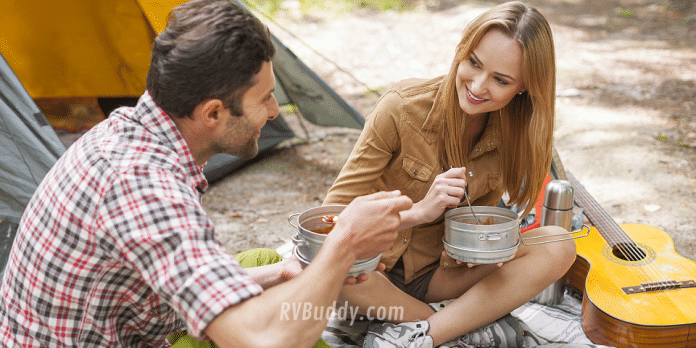 Fort Summit KOA was disappointing. The campground is expensive, but they do have a good cable selection. The bathhouses are a bit of a mess, with trash scattered around the campground. There are little invisible burrs (that make the dogs wince in pain) in the area where you are directed to walk your dogs. Why other campers did not clean up after their dogs is probably related to the trash everywhere and the horrible smells coming from the overused and infrequently placed dumpsters. There were ants at our site but they were taken care of almost immediately by the nice staff, but in a real toxic mess of some liquid that we wished, afterwards, we had not solicited, because of the dogs sniffing around it.

There’s another campground right next door, but it didn’t look much better. We even had to say something to these teenagers that were going to walk through our site and stepping right over our hookups for no apparent reason other than they wanted to go that way, which was not even faster or more direct for them. Ultimately, we asked this nice older couple in a class A (from Ohio: Hey there, thanks again!) to watch our van while we went to the wedding (fifty grand if you want to know!) because we worried about our site’s safety… and believe me, we aren’t normally worriers about this sort of thing.

There were lots of unsupervised, moody/unfriendly, and weird teenagers (is that too redundant?). This is the truth of it, and this bad review is beyond the owner’s(‘) or management’s abilities.

The traffic up I-4 is a nightmare whenever the sun is up! And worse are the other people camping… RUDE! No kids with us, so maybe we’re just not used to it, but weren’t there some spoiled and rude kids there! Lots of political bumperstickers, mostly supporters (if you get my drift here), for any campground, which is normally an apolitical place.

Oh… the sites were not level. It took us about a half hour to find the least tilt on our pretty average site. There was nowhere to walk or run. It was hot, noisy with constant traffic, and the way some of these families in their tow-vehicle minivans drive to get their precious kids to see Mickey! We’d sooner stay at a WalMart parking lot than here again.