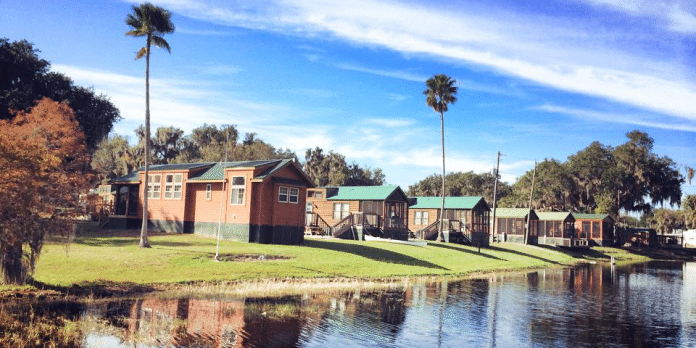 55+ park, Nice clean well kept park, beautiful lake, but fishing pier was always under water. A few sites with amazing waterfront view but they are placing permanent mobile homes on those sites.

Owner & Manager are not RV friendly altho we never met Owner. They are gradually making this into a mobile home park, buying & adding mobile homes one at a time.

Bathrooms, showers, community centers/halls were closed due to COVID, billiards room & laundry was open but we didn’t use.

We are full time RV people. After viewing pricing & details on the web, we called & got the same pricing from park Manager. We visited & fell in love with a waterfront site. The price of the site changed 3x while we were there. In hindsight this should have been our clue to run, but we loved the view, park was nice & we thought the Manager was nice as well so we made a reservation for a 6/6 stay which required upfront payment for the 2nd 6 months. 2 days later Manager called, tried talking us into taking the site that was our 2nd choice because they wanted to put a mobile home on our site but wouldn’t be until after the season when we were not there so we said no.

Moved in 2 weeks later. Once we got settled, Manager having seen my near perfect credit score tried talking me in to paying 12 months rent over a 70 day period (Oct 24-Jan1). She says to me, “I told the owner you won’t need 6 months to pay, you can do it in 3.” When I told her it made no sense she tried making it sound like she was doing me a favor & giving me 4 months to pay. To me 70 days = 2-1/3 months, but either way, it made no sense. Why would I pay 12 months rent up front?

Couple other things came up, got so bad that every time we saw her walking our way we looked at each other & said “What Now?” Last straw – her call saying owner rode by, saw we had 2 vehicles & said 1 had to move to overflow lot (aprox 1/4 mile from our site). We both have jobs, walking 1/4 mile to a car at 5:30 am was not an option. WE MOVED OUT which is probably what they were shooting for.

We were up front about everything who we are, what we have, how we live, no secrets. She was absolutely OK with everything – until we moved in & got settled.