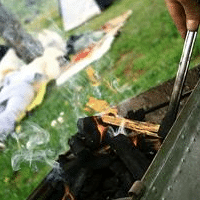 This is the first time I’ve ever felt compelled to post a negative review. We were in North Carolina on vacation and decided to look around for a nice family campground while in the area of Winston Salem. Dan River campground seemed to look great from all the things we saw on the internet.

We drove there without the trailer just to check it out. When I went to the office to ask if we could look around I was berated for driving too fast down the gravel entrance road. I was maybe going 15mph because it is a very bumpy, potholed, gravel road. I was told the speed limit is 10 mph throughout the park. I told them I never saw a sign and apologized.

We then went into the park making sure we didn’t exceed the 10 mph speed limit. It looked clean and well maintained so we decided to book 4 nights. On the way out we were again stopped by the manager, Glenn, who again bashed us about driving too fast. I told him I was driving 10 mph and asked if there was a sign I had missed at the top of the road when I came in. He said yes.

Despite these 2 run ins we went back and got the camper and kids. Upon our return I noted that there is no speed limit sign at the top of the gravel road. It is at the end by the office. We checked in and set up camp and decided to let the kids go swimming in the rather small pool. We took 2 juices in plastic cups because we know you can’t have glass at the pool. Glenn drives up and yells at us that there is no alcohol allowed at the pool. I told him we weren’t drinking alcohol and he replied there is no drinking of any kind allowed at the pool despite the numerous cups beside pool chairs. He then accused us of moving the pool chairs around. After all this hassle by the management we left the pool and the following morning left the campground.

I can’t really say much about the campground but the attitude of management is reason enough to avoid this campground. When I went to the office I was told by the employee that others had complained about Glenn’s attitude and he was well aware of it. We spoke with several other campers and they were not happy either. One couple had been there 6 months for work and when the job got extended 2 weeks management made them pay full price for the additional 2 weeks. Have a heart!